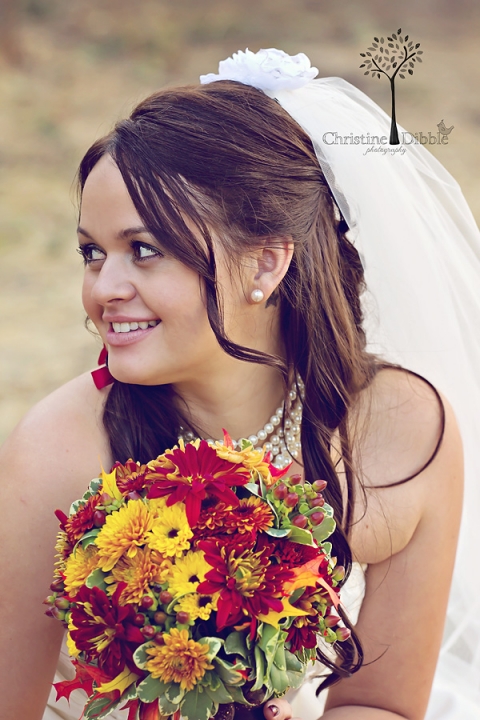 I had been wanting to set up a wedding shoot for a long time, and earlier this fall, I decided to quit mulling it over and just go for it.  I immediately thought of Tiffany for my model.  She is the right age and she is gorgeous, so I was excited when she agreed enthusiastically.  I was happy with just a bride, but Tiffany asked her boyfriend, Travis, if he would be a groom.  Really, what guy wouldn’t run as fast as he could from that scenario?  Well…Travis didn’t!  And he was the perfect groom!  We found a $35 dress on eBay, and we were on our way.  The day of the shoot started with rain, hail, keys locked in my car, and several other mini emergencies, but by the time Tiffany and Travis arrived to start, the sun was out and everything was right again. Tiffany and Travis were rock stars and they were up for anything.  They wandered all over the grounds with me and did anything I asked them to.  Most men barely tolerate the fancy clothes and posing for their real wedding, but Travis did it all voluntarily for someone he had never even met, and he never even rolled his eyes once–that I saw anyway!

The jewelry was provided by Tiffany Vargas with Premier Designs.  They have lots of beautiful options for brides and you can purchase any of it through her.   Liz Tarter of Country Girl Hair and Nails styled Tiffany’s hair, and it held up beautifully in the damp weather earlier in the day.  Amanda Russell with Beauti Control did the make-up, and Addictions Tanning gave Tiffany a spray tan before the shoot.  Bear’s Garden Florist made a beautiful bouquet of fall colored blooms.  (Two weeks later, it still looks almost as good as it did when I picked it up.  Just a couple of blooms have wilted a bit.)  And the shoot took place at Twain Harte Tree Farm, which may be the most beautiful setting ever to host a wedding.