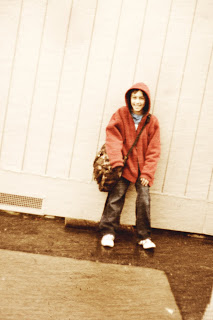 I am so bummed that this picture was not clear. I snapped it as I was leaving Colby’s classroom. He was waiting outside because he couldn’t stand to be inside anymore. He was absolutely giddy and walking on air because he had just told Josie he likes her. He said she didn’t say much, but the looks and blushes the two were exchanging said it all. The boy is pretty brave. He decided the day before he wanted to tell her how he felt, and he did it. Pretty cool. At the same time, he is only 11. I think we may be in trouble!